Queen Adreena, I Adore You

At 13 years if age, I was a fairly avid reader of Kerrang! magazine. Bought it every fortnight or month or however often it came out, pored over each page and discovered many, many musicians who morphed my world and added to my identity. One band I found through the pages of Kerrang! was Queen Adreena. I had noticed pictures of the band and their delicate singer over the weeks, and, getting a free cd with one issue that had their song Siamese Almeida on it, I listened. And enjoyed. And listened again and again on repeat. It was alternately delicate and powerful, modern and oddly medieval, highly sexual and completely innocent. Which is a nice, highly polarised way to summarise Queen Adreena as a whole. 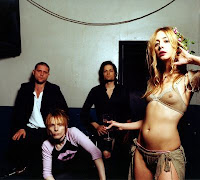 After that, I bought their first album, Taxidermy. Fairy music, out and out. It just had a beautiful sense of fatigue, that potential energy that never becomes kinetic. Drink Me was more raw, more junkie and filthy. The Butcher and the Butterfly was something of a resolution between the two. A pixie that longs to join the real world and can't hack it. Or something. Taxidermy remains my favourite to this day, probably because I listened to it all the time at a point when it really, truly meant something to me, when I could place myself inside it.

Some songs from the Taxidermy era mashed together
Video for Pretty Like Drugs off Drink Me
Medicine Jar from The Butcher and The Butterfly
Posted by Dahl at 13:20

This is a great post. I just had one of the ‘Doh!’ moments and ran back to correct my own site before publishing my comment. You see my own comment form did not match what I’m about to advice. I get less comment than you, so never noticed any problem. I’ve changed it now anyway so here goes.