An Ode to Used Books 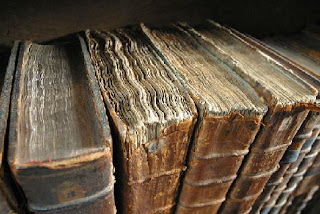 It seems a bit odd that in a blog I want to dedicate to novelty and newfound loves, my third post should be about used books! Still, I can't resist the urge to profess my love to those yellowed pages and broken binding.

Aside from being ridiiiiculously cheap (€1 used compared to €16 new? My choice is made! Except, of course, for special editions) and a more sustainable option, there is something terribly romantic about used books. I love how they smell - that gentle, subtle old-building muskiness that they exude (I'm not a freak, I swear! We all have our weaknesses. Who wants to make a cologne that smells of old books for me to force upon pretty boys?). They look like they have a history, with their battered covers and dry, browning paper. Who carted them around before now, and in what kind of bag? What kind of room were they kept in? What made the original owner buy this book?

I think it's that sense of connection with the previous reader that is most beautiful. I'm going to make a reference now to The Perks of Being a Wallflower, which I think just about every teenager who felt themselves to be a little alternative has read. And that's a compliment, not a deterrant; it certainly made 14-year-old Kerouac-obsessed gothy me feel a lot more comfortable in my skin than more conventional teenage books. Anyway anyway anyway, the reason I refer to it is that the strongest sentiment I gleaned from the book was that one is never alone because other people have seen the same things, felt the same sentiments and had the same thoughts as us, even if we never meet those people. Even if the person who read my new-old book before me didn't feel the same way about it, well, we've both read the same text from the same book, we are connected in some arcane way. My hands are where theirs were and my eyes are focused on the same point. It's a lovely sentiment when you think about it. And just as I think of them, they may have thought of the next reader when giving their book to the student union shop, or the parish sale, or wherever I crossed paths with it, and hoped that whoever reads it next enjoys it as much as they did. Or maybe they think "I pity whatever sucker shells out for this heap of trash," which probably applies to me, inclined as I am to buy books about anything (extremely dated sociology books on taboo for €1.50 anyone?). Hey, it's still a connection and it still applies.

I'm never distraught if I leave a favourite book down somewhere and wander off without it because I know that it'll be found by someone who might enjoy it and might feel the same about it as I did (unless they chuck it in a bin, in which case it's their loss!). And then, they might go and write in their blog about how they love the romance of old books and how they love thinking that someone else has read this book and felt something about it before them...
Posted by Dahl at 17:46 4 comments:

I usually like setting little goals for myself but nothing in particular struck me before January 1st this year. No great loss, New Year's resolutions are a cute idea but I can make resolutions in March or September just as well. A couple of days ago a friend of mine was telling me about Buy Nothing Day and it struck me as a fantastic idea. However, one day of buying nothing, although it has a huge ideological impact when many people participate, isn't going to make much of a difference to my personal life. I can go out and buy that gorgeous dress the next day, having abstained simply because it was Buy Nothing Day. So, as well as participating in Buy Nothing Day when it rolls around next, I vow to take my aspirations to conscientious consumerism up another notch. Here's how:

In fairness, I'll be buying secondhand, but 'vintage' removes a whole lot of stigma and sounds much nicer. I've already enacted this with books because most bookshops now have a good used section, and my college frequently has secondhand book sales where I'm tempted into adding another wing to my personal library (also known as my bedroom floor and already-overcrowded bookshelves) and completely neglecting to buy the books I need for my course.

Clothes are something more of an issue. Because my grandparents' and even my parents' generations were often made do with hand-me-downs, buying secondhand has something of a stigma around it in this country. Now that people are doing well for themselves, they want new things and want their children to have new things, 'the best', too. Charity shops tend to have slim pickings, and specialist vintage shops can be quite pricy. Thrift stores just plain don't exist here. Still, I have no excuse not to make an effort. Running into Topshop to pick up a new skirt might be much easier but there might be a similar item hanging untouched in a vintage shop somewhere that is cheaper, nicer and comes with the guarantee of not belonging to one of my classmates too. Plus, there's something immensely attractive about clothing from another era... but that's for another post on another day. Ebay and online vintage shops are a temptation as well, but they tend to leave something of a carbon footprint so I would have to balance the pros and cons of a particular order before clicking 'Buy'.

It isn't possible to boycott absolutely every single company that has ever done anything vaguely immoral since their conception. Still, just like with buying secondhand, it's better to make an effort of some kind than to do nothing at all. I'll keep an eye on the business section of the paper to see who's taking over whom, as well as visiting sites like Ethical Consumer and Adbusters regularly.

I'm by no means patriotic and I believe the global community is just as important as the local community, but by buying Irish products I'll leave less of a carbon footprint (I adore that term, being the cheesy creature that I am). I have already sacrificed my beloved kiwi fruits, and after the pain of that I can endure anything!

& Taking a 'slow and steady' approach:

Only ever buying vintage, organic, local, environmentally sound products from the get-go would be admirable, but not entirely easy. If I was to do that, I'd probably hit more than a couple of stumbling blocks, get frustrated, and give up. Hypocrisy is an awful thing, but if I, or anyone else who is trying to become a more conscientious consumer ends up buying from a large corporation, we don't become hypocrites for doing so. Some effort is better than none at all. The point is to cut back, not cut out, though maybe in a few years I'll be in the position to make a resolution to cut out entirely.

Buying something new, or from a major corporation is completely okay from time to time, as well as being unavoidable. We live in a world where we aren't self-sufficient and that's a good thing; it fuels a kind of community and solidarity. I'm going to start enacting these guidelines for myself bit by bit, getting used to each step before I move onto the next one. That way, this resolution will have longevity.

I'm completely open to suggestion and contradiction!
Posted by Dahl at 16:41 3 comments:

Well, besides from being a phonetically and visually lovely word, and a kicky little symbol that I agonised over learning to draw way back when, ampersand denotes that there is something to come, something else to layer on top of what's here already. I love discovery, I love gaining knowledge, I love novelty and I love sharing those things with others. The focus of this blog is nothing novel, unfortunately. It's just going to be a compendium of incidental thoughts, experiences and pretty things I want to share, things that are new to me, or potentially new to readers, or both.

Eighteen-year-old student of English literature and psychology. Dubliner who smiles often, dances (ballet) purely for pleasure and had a poem published for the first time in November. Public transport enthusiast who puts blusher on her nose for that frostbitten look and likes films based on Jane Austen books more than the books themselves. New blogger who is slightly ashamed of using such painfully hip sentence fragments but likes how compact and snappy they are.
Posted by Dahl at 18:34 1 comment: