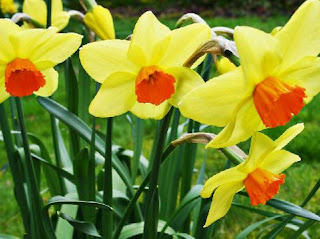 Dublin is kinda at that point where if it was a little warmer and we had a few more sunshiny days, it would be springtime. The daffodils are making an appearance, which is a sign! I'm a terrible spring addict, it's drizzly but not depressing, sunny but not hot and an all-around pretty season.

So, here is how I shall be celebrating spring:

& This week is rag (raise-a-grand) week in college so there will be plenty of outdoorsy activities including the iron stomach (that I have to fundraise at... hopefully the funny will surpass the gross).

& Lots of floaty summery dresses with cardigans on top, denim minis with fluffy jumpers, short jackets with flared jeans. All with the obligatory scarf, pashmina, silk or square depending on the highly-changeable weather! Pictures to follow, I swear.

& Picnics at the Pav! The Pav is our student pub and it is amazing. Indoors it's tiny, the toilets are gross and selling beer in cans is a testament to its classiness. However, it's a really outdoorsy pub, with plenty of terraces and picnic benches, a view over the cricket pitch and lax policies on bringing in your own booze and spilling onto the edges of the cricket pitch when it gets busy. Plus, it's the sort of place you can just show up and you will know somebody.

& Night-time wanderings. I adore walking through the suburbs at night, I'm not really sure why. I think it's because they're so generic and spread out that you'll always wander somewhere you've never seen. It gets a little surreal sometimes. Plus, there are loads of hidden treasures; an ex once showed me a little river below a main road and I found a park I never knew existed.

& Making daisy chains. There are some hobbies you never grow out of.

& Reading outdoors. Oh, it's a lovely feeling having to fight against the wind over page-turning. Hang ooonnnnnn, I'm not done with that page yet.

What's everyone else looking forward to about spring? Or do you all hate it with a fiery passion?
Posted by Dahl at 07:28 No comments:

I don't hate television. I think it's amazing, in fact. It can be used to educate, create and agitate. Most people have one, and TV licences and basic cable packages are cheap (if not free). Unfortunately, we don't seem to be using television to its fullest extent. It’s both visual- and audio-based, and yet, it’s radio programming that shows greater originality. Think about it - most radio programmes have a host, a conversational component that would become stale if it was repeated. Almost every day there are new guests, new interviews, new critiques, new songs, new recommendations, new dramas, new stories. There are repeats, but they're quite rare in comparison to television. Of course there are chat shows on TV that have new content every day, and new TV series are released all the time (maybe not so much recently due to the strike, however) but weigh up the proportion of original material vs. repeats on television, and compare it to the radio's proportion. Something is definitely amiss.

What spurred this post was something interesting I heard about mai '68 (the English department at my university is utterly obsessed with '68. Utterly) In one of our lectures the lecturer told us about the hijacking of French television stations by the revolutionaries and the subsequent broadcasting of the '68 slogans (I will make a post on my favourite slogans at some time, probably. The obsession is spreading). So, instead of being inspirational and sending the viewers to the streets to agitate, people just stared blank-faced at their televisions, treating it all like the usual broadcast, like mindless entertainment.

I understand that it's harder to constantly create something new for television. Sets, writers, equipment, actors all cost money. A new creation doesn't always need to be elaborate, however. There are lots of people seeking experience who would love the opportunity to broadcast. We don't have public access broadcasting here, which is a pity, but even so, television companies should actively seek new material to replace the incessant, and I mean incessant, awfully, terribly, frustratingly incessant re-runs that take up about half of the station's airtime. Lots of universities have amateur film-makers' societies (this is my university's, I'm not involved outside of helping with one film, but I thought I'd plug them anyway because they have some good shorts up there), and those socs would probably love the opportunity to showcase their work.

All is not doom and gloom and fatality, however. I adore Channel 4 (UK) for the bizarre stuff they show, as well as the great documentaries. They’re not as confined, as the BBC, either. My favourite TV-station is the Irish language one we have here, because they show compelling documentaries, art-housey films and have lots of community-related broadcasting. They even filmed the first ever musical put on in my old school (an original production of An Táin, written by a past pupil). They also have the greatest, most provincial and cute reality show ever in the existence of THE WORLD, called Paisean Faisean, where three young men or women have to pick out an outfit for a fourth participant, who in turn picks their date based on their favourite outfit of the three. None of them ever really like each other, and they’re mostly schoolteachers and students so the awkwardness of the date afterwards really shows through. It’s like Blind Date in Irish and on a smaller budget, I love it.
Posted by Dahl at 10:56 No comments:

I was a teenage gothic lolita.

I told you I'd be awful at regular updates! And now, onto the point of this entry:

At age 15 a friend linked me to this Morbid Outlook article on Gothic Lolita and from there on in I was hooked. I loved the gothic look but long sweeping skirts don't suit 5-foot-zilch me and the only outwardly gothic clothes accessible to me at the time were made of tacky crushed velvet and fishnet. Gothic Lolita, however, seemed beautiful, whimsical and elegant, as well as appealing to my love of everything doll-like and Victorian.

The online gothic lolita communities were a great source of advice, encouragement and information and I’m sure that they continue to be as such. I recall the first time I posted photographs. They were of the outfit below, which I wore to my then-boyfriend’s debs. As well as getting tidbits of advice such as “ditch the fishnets, go for solid or classically patterned tights,” I got the assurance that I was ‘doing it right’ and one girl even commented that I looked like a duchess! That remains one of the most wonderful compliments I have ever received. 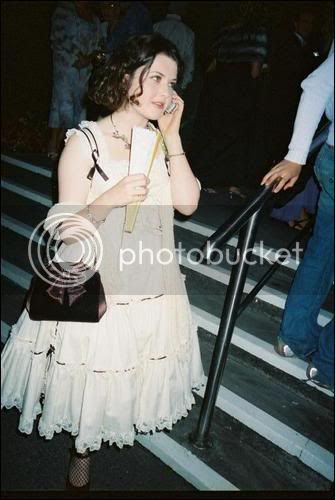 However, two things emerged from out of the depths of the lolita community that frustrated me. The first was the cattiness. An online community filled mainly with females (excuse me for the gender stereotyping but PMS is a cruel, cruel mistress) who have the guarantee of anonymity is sure to tempt people into bitchiness, but I really have no tack with people who will put their energy into tearing apart someone who is looking for advice. The worst manifestation of this bitchiness was a livejournal community wholly dedicated to reposting other people’s pictures and making a mockery of them. Lots of people, myself included, joined in order to find out if we had been posted or not. Lots of girls made mockeries of themselves so as not to be targeted. We were bowing down to a bunch of bullies instead of challenging them and their constrained views of what lolita fashion could and could not be.

These constrained views were the second and main reason why I stopped reading online gothic lolita communities. I understand that it is a particular ‘style’ and to execute it properly certain elements needed to be there, but I got sick of doing that. I wanted to wear high-heeled oxfords, not multi-strap mary-janes. I wanted to look like a Victorian picnicker, not a fluffy princess. I wanted to wear my lolita dresses, blouses, socks and hair-bands in an unlolita way, my own way. So that’s what I’m doing now, and I’m pretty happy about it. I get to let the Victoriana-obsessed part of me leak out without having a long list of things I need to buy to ‘do it properly’. I get to express myself while wearing some of the most beautiful dresses I own without conforming to aesthetic ideals that aren’t my own. And I’m pretty happy about it. 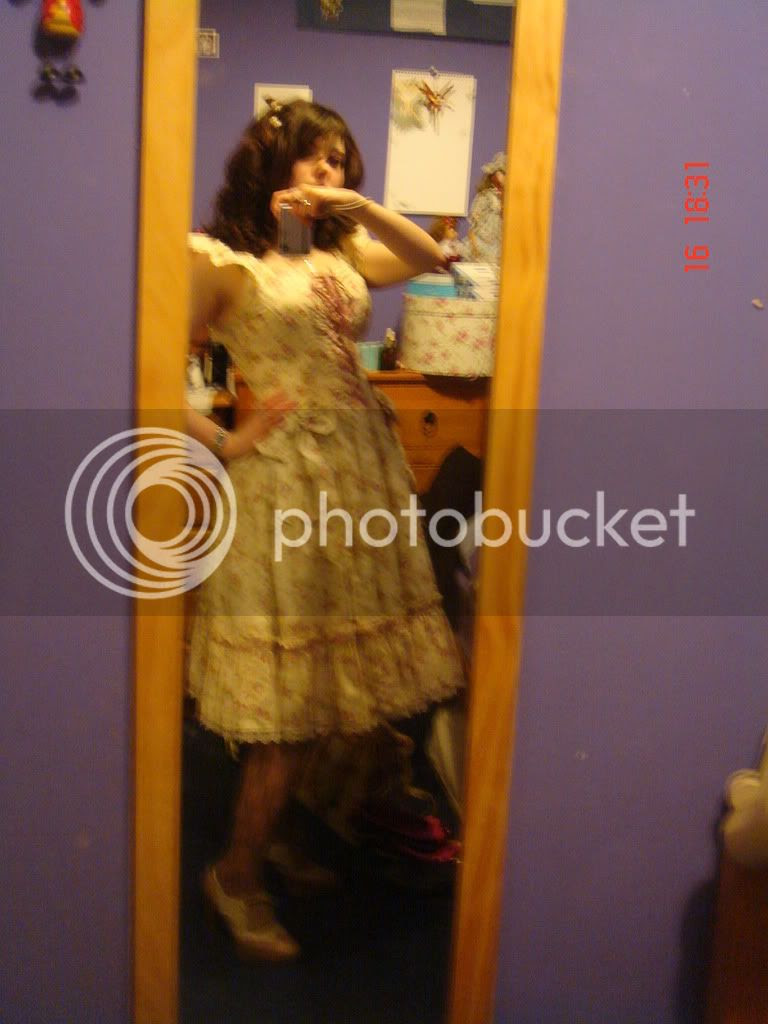 There's a recent outfit (bad quality photo, sorry!) with my all-time favourite dress by Victorian Maiden, white rose clips in my hair (Accessorise), oxfords (River Island) and brown patterned tights (the mother and her generosity). It's not particularly mixed-up but I like it.
Posted by Dahl at 07:15 4 comments: