Dystopian art is fascinating. For me, at least. As a 14-year-old, reading Orwell's 1984 and Huxley's Brave New World was de rigeur among my circle. We wee pseudo-intellectuals would spend hours (or, more likely, about half an hour each time it came up, but hours makes us sound more fervent and zealous) discussing the two, comparing and contrasting and generally prattling on with very limited knowledge on communism and capitalism. I can be critical of the pretentiousness now, but it was more the desire to think and understand and form an opinion than any kind of pretension, and it would warm my heart to overhear a young'un confess their ardent love for a book over coffee they haven't quite developed a taste for. Alas, now that we have Starbucks, it seems to have sucked all of the under-16's away from the teeny independent cafés and into its vacuum. Sad, sad, sad. Aside – just had a laugh with my dad about Starbucks dipping into the tip jar to pay supervisors. Thrifty business skills, whut.

Anyway, my love for wannabe-beat adolescents is a bit of a venture away from dystopian literature. Dystopia varies from post-apocalyptic scenes through cyberpunk cityscapes to claustrophobic suburbia. It’s sordid, disheartening and at its best, unsettling and utterly disturbing. Aside from 1984 and BNW, some dystopian works that really got a grip on me were Crash, Neuromancer, Transmetropolitan, Dubliners and The Virgin Suicides. Those last two aren’t usually considered to be within the canon of dystopian literature but I’m flinging them in there anyway, ‘cause I can. Thank you, art, for being subjective.

I read Crash by J.G. Ballard during the summer and it had my morbid curiosity faculties going ninety. It’s sordid, it’s sleazy, it’s full of bodily fluids and Ballard uses the most devastatingly close, slow prose and detailed, shimmering imagery to sharpen some terribly gruesome images. If only suburbia was really that compelling. It’s been a while since I read Neuromancer but it was wonderfully dead-end. My cyber/technophile boyfriend lent me Gibson’s second book, Count Zero, but I couldn’t get into it. It wasn’t as compelling and shiny and new (and yet hopeless and tarnished) as Neuromancer. Transmetropolitan is just funny, and a little bit 1984-esque with its ‘if we keep going in this direction...’, except it’s non-preachy in its moralising. I’ve read so many flatulent, wanky graphic novels and I can understand the cynicism towards comics but Transmetro is actually compelling and cool and intelligent. 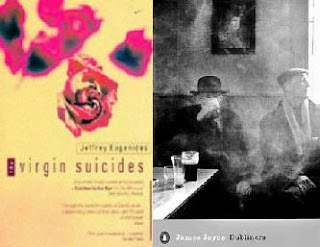 I do think that Dubliners is quite dystopian. Joyce described the city as Ireland’s ‘centre of paralysis’ and his stories really portrayed it as such. Everyone wants to escape, but nobody does. They all back off at the last minute, or no longer have to opportunity to, or think they’ve escaped when they really haven’t. There are all manner of taboos and things that don’t belong in Utopia in the book – insanity, dead-end marriages, decay, illness, Magdalene laundries, excessive power, betrayal and loss of idealism. It’s a realist text, unlike Ballard’s, Gibson’s and Ellis’s. Food for thought, eh? The Virgin Suicides is more counter-Utopian than dystopian because it doesn’t display an undesirable society; rather it shows what brews under the flowerbeds and behind the white picket fence that are supposed to be desirable. Suburban Utopia’s one fatal flaw is, I suppose, the lack of something to do, somewhere to progress to. I love Eugenides’s prose, I love how slow and heavy the atmosphere is and I love how nothing seems to happen for pages and pages, and yet one looks back and a lot has passed.

I think the reason that Dystopia is so compelling, aside from the ‘things could be worse’ perspective (which, as an aside, I despise – if things aren’t perfect, looking somewhere else and saying ‘ah well, we’re not so badly off as them’ as an excuse not to strive towards the unattainable goal of perfect is pure laziness and the key that opens the door to decline. Be happy, but never be content) is because it taps into real fears. Cold War, anyone? We all like to be frightened out of our wits and I, at least, like being confronted with prose-images I’m uncomfortable with (real images are a little harder to stomach). Unfortunately, there are some real dystopias in our world right now – Iraq, Tibet, Palestine, parts of the Balkan region (Chernobyl is the kind of thing dystopian literature thrives on – demise occurring because of modernisation and supposed progress). Dystopian literature may go a step beyond reality – no worldwide nuclear holocausts have occurred just yet – but it’s compelling in how it is merely a step beyond reality and not a constructed unreality as it seems.
Posted by Dahl at 08:22